“Waitrose and Whitbread have … asked us to remove their logos from the positive list we have been circulating. … very unusual for a company which appears on one of our ‘positive buy lists’ to ask for its name to be removed. … It speaks volumes for the power and resources of the shooting lobby which, ironically, accuses Ethical Consumer and Chris Packham of ‘Corporate Bullying’ in its press release.” http://www.ethicalconsumer.org/latestnews/entryid/2180/corporate-days-shooting-campaign.aspx

Saturday 12th August is the start of the 121-day-long grouse shooting season. Ethical Consumer is asking consumers to buy from the good and avoid the bad during this year’s shooting season. 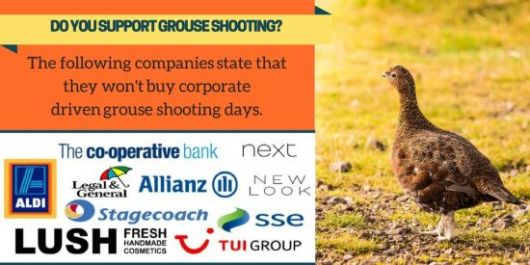 Another ethical source: Ethical Superstore – 20% off all grocery until 16 August plus get £3 off your order when you spend £50 until 31 August – promo code: X3PBM

This site uses Akismet to reduce spam. Learn how your comment data is processed.